On this page we will pay honor to former Blue Knights and others who did not qualify for inclusion as a Heaven 1 member.

October 28, 2022 - Vern Waldner the 'worlds' greatest volunteer passed away today.  He was the 3rd generation to serve in the U.S. Navy.  His children and grandchildren have continued to serve.  That's right 5 generations!

He was a member of the Anoka County Sheriff's Office Reserve Unit for 26 years and volunteered over 15,000 hours serving the community.  He also volunteered many additional hours at Alexandra House, Camilia Rose Assisted Living, Epiphany Pines Senior Living, Mothers Against Drunk Driving meetings, and the Coon Rapids Senior Center.  Vern was known for his willingness to take on any tasks as a volunteer.  He always had a smile or kind word but wasn't afraid to privately say It's all B******.   For those of you who know / knew Vern consider wearing your badge to his memorial or service to honor a man who could of been a sworn officer, but chose to be a proud supporter of the men and women in our military and law enforcement instead.  See Waldner Visitation / Service

October 3, 2022, - Susan Elaine (DeBerardini) Rohrer, was the long time partner in mischief of Dale Werth.  She navigated while Dale drove the Harley and was often heard to say; "Yes Dear".  She was a lover of Cats, Dogs and Horses.  She is missed by her family and friends.

September 14, 2022 - Anoka City Police Officer Eric Groebner passed away at home due to a medical condition.  For those that don't know Anoka is the Halloween Capital of the World.  The staff of Anoka P.D. is small in numbers but big in heart and 'family'.  The agency is in recovery mode and assistance is being given to his wife and children.

Juy 21, 2022 - Former B.K. Bruce Anderson, left us today.  Bruce was known as a man who thought before making decisions, but wasn't above wanting to laugh or perhaps even play a joke or two on friends and co-workers.

December 31, 2021 - Betty White, actress, comedian, animal lover passed today.  She was said to be a class act and kind to everyone who crossed her path.  Sounds like a Blue Knight doesn't it?

October 18, 2021 - Colin Powell, former U.S. Secretary of State and retired 4-star general.  He has been described as an honest man and who can argue with a 4 star?

July 27, 2021 - Red Lake Police Officer Ryan Bialke was killed in the line of duty. He was responding to a report of a suicidal male inside a home with children. Our thoughts and prayers go out to him and his family.

May 24, 2021 - MN Conservation Officer Sarah Grell was killed while on duty in a motor vehicle crash.  She was known to be a dedicated family member and outdoors person.

February 10, 2021 - The Blue Knights lost a shining light today.  Marj Masley has departed this world.  She was always smiling and had a kind word or hug for everyone.  She could of been a Blue Knight but she chose a different path to help people.  She was the arm candy for Morrie A. and he knew it.  Our thoughts go out to Morrie, Mike S., her family and friends as they deal with the loss.

September 21, 2020 - Blue Knights offer their condolences as two of our own go through the difficult time of having lost an adult daughter to that nasty, evil, mean, illness; cancer.  Our thoughts and prayers go out to them as well as the family and friends of Trisha Haapoja.

July 21, 2019 - North Branch F.D., Safety Captain Anthony 'Tony' Rollins died in a motor vehicle rollover crash.  Tony comes from a family devoted to Public Safety Organizations.  He was known to enjoy setting up practice burns so his partners could learn the safest and quickest way to put them out.  Our thoughts go out to his family, friends, and the N.B.F.D.

April 15, 2018 - R. Lee Ermey - U.S.M.C. Gunnery Sergeant Ermey was known for various tv roles.  He was a strong proponet of all military branches and law enforcement.  He was a Glock Firearms ambasador and known for many quotes including "What is your major malfunction?"  R.I.P. Gunny OOH-RAH

2017 Carol Pendleton - Wife of former member Bert Pendleton and longtime Hennepin County Court Clerk.  She was a stong supporter of the Blue Knights.

October 25, 2017 - Stanley Kowalski - The wrestler known as The Krusher and a tireless advocate for Homeless Veterans, The United Way, MN V.F.W.'s and an Anoka County Sheriff's Office Honorary Deputy.

April 13, 2009 - Larry Ferrier - A chief who always told his officers that it was their duty to go home to their family at the end of the shift.  "Don't get hurt on the job!"

Our Chapter Officers can be contacted privately under their tab.

If you are reading this, you probably have a friend, family member, loved one, neighbor, etc. that is in the field of Public Safety as well as a motorcycle enthuasist.  Remind them to Wear Their Vests!  Don't leave them on the front seat of the car until they are really needed.  Yes they are hot.  Yes they are warm, but it's easier to wash off sweat at the end of the shift then a bullet.  Sure we may smell a little, but I promise you a hug from a loved one saying thanks for wearing your vest but you stink is much better than the alternative.

PLEASE remember to keep your eyes open for us. We drive squads, rescue rigs, motors and ambulances.  We do it fast and precise.  We are more fun to watch than NASCAR since we don't make just left turns.  Don't try capturing video of us while you are driving.  Yes the lights on the rigs are pretty, but pay attention to your driving.  Give us extra room when you pass us while we are helping others.  We appreciate all the distance between us on foot and you in your vehicles.

Make sure to keep your eyes open after the first emergency vehicle passes by.  We are like deer, if you see one, you will proably see many more coming.

Finally, If you want to see the pretty lights up close stop by your local public safety agency and ask to see them. Bring your children, grand children, neices, nephews, etc.  Let them meet some real heroes; the men and women of Emergency Services.

If you have a humorous photo or cartoon that is motorcyle related, please consider sending it to our e-mail.  We will review it and may place it on our web page. You could become infamous as a result of your photo appearing on our web page.

Now for the legal disclaimer about your photo / cartoon:

You won't be paid for submitting your photo.

We have the ultimate say in what is posted in good taste and humor.

We will credit the author if known. 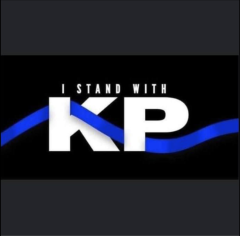